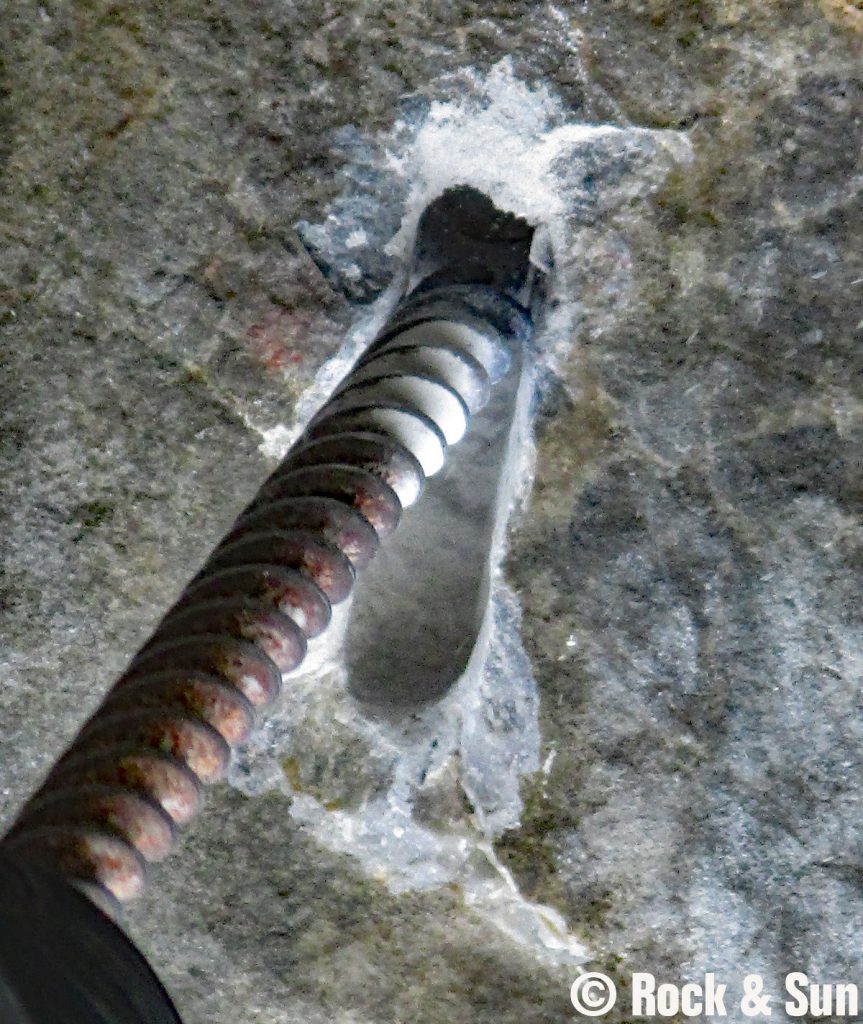 The Case For Resin Bolts

This article will look at why the use of resin bolts and anchors might be the best choice for sport climbing. It will also look at what might be the best materials to use and hope to share greater understanding of how they work and the choices available. Much of this has been learned through trial and error in addition to extensive research.

What are the advantages of resin anchors over expansion bolts?

Having been involved in new routeing in Thailand since 1993 I’ve seen it go through some major changes, from rapid development into one of the world’s most popular sport climbing destinations in the early 90’s, to a dramatic slowdown as bolts started failing catastrophically. What were thought to be the best marine grade stainless steel expansion bolts would sometimes break under body weight less than a year after being placed!

A great deal has been written already about the tropical or marine environment and bolt corrosion. I do not intend to go into this in any great detail here but have included some links for those that are interested in gaining a better understanding of why and how certain rock types and environments can have a more aggressive corrosive effect on stainless steel, alloys and other metals than others than would be considered normal.

The tropical paradise of Thailand can be seen as a testing ground for climbing anchors. There does not seem to be a harsher environment for bolts than this one: if bolts can last in Thailand then they’ll work pretty much anywhere!

Once it had become apparent that even marine grade stainless steel expansion bolts would not work in Thailand, new route developers turned to glue-in bolts hoping that isolating the bolt from the rock and the greater surface area of the bolts versus that of a hanger would solve the problem. The results were mixed. A large variety of stainless steel glue-in bolts were used to rebolt existing routes and create new ones. It would take much longer for them to show signs of corrosion but in time even the best quality stainless glue-in bolts started to show worrying signs of corrosion and then failures started to occur. Unfortunately, the first round of rebolting was carried out with Hilti’s recommended RE-100 glue epoxy, but unbeknown to Hilti the cliffs in most Tropical locations suffer from a great deal of seepage during the monsoon season. RE-100epoxy is porous and not flexible enough. The ensuing cracking and shrinkage allowed water seeping through the rock to come into contact with the bolt. By the time we realised that the glue was a problematic weak link, hundreds of bolts had already been placed. When made aware of the problem, Hilti suggested using the RE-500. It is waterproof, can be used under water so also in wet conditions with minimal shrinkage, it is incredibly strong and should be good for 50 years or more. It is by far the best resin I’ve ever used.

At about the same time, an affordable source for titanium bolts had been discovered. Now there is much debate about other metals being as suitable for tropical or marine environments and it is not for me to suggest that anything other than titanium would be irresponsible but titanium bolts have been used in the Grand Cayman for more than 16 years and Thailand for a little over 13 years and are showing no signs of corrosion. The UIAA recently carried out some extensive research that led to the UIAA Safety commission recommending only the use of Titanium and high end ‘HRC’ alloys (6% Molybdenum stainless steel such as 1.4529, 254SMO) in these environments. They have also suggested that the expected life time of fixed protection in any environment should be a minimum of 50 years. It seems that the titanium bolts in combination with the RE-500 have the best chance of lasting a lifetime.

So where does this information leave us?

We have whole crags in places like Kalymnos being rebolted with stainless steel glue-in bolts less than 10 years after being developed. There is a reasonable chance that these routes will need rebolting again in 10 or 15 years. We have seen recent stainless steel glue-in bolt failures in Sardinia, multiple bodyweight failures in Taiwan of Petzl Collinox glued using RE-500 after less than 10 years, and Fixe anchor chain failures in the Costa Blanca. Some anchor failures and weld cracking have occurred at indoor and outdoor walls in both Germany and the UK. Perhaps we should take a longer term approach to equipping sport routes?

Maybe the pace of new route development will be slower due to increased cost, but the savings in rebolting could be enormous. Certified titanium bolts are now available from around £6.50 to £9 from Titan climbing, a Sheffield based company. This is not cheap when compared to expansion bolts, but they will probably last a lifetime if placed properly and with the correct glue. Pure epoxy resin can be purchased direct from Hilti or Titan climbing at a cost of around £16 per tube, which is enough to place about 25 bolts. A single pitch would cost approximately £75-£100 – even ignoring the safety advantages, surely at £2/year for a route anything else is a false economy?

In the next installment, I will share some of the lessons we have learned from placing thousands of bolts.

Trevor Massiah is a Mountaineering Instructor based in Spain and is the owner operator of Rock and Sun which runs climbing and bouldering courses and holidays in many parts of the world. He has been working in the outdoors for 33 years and has climbed extensively around the world. His favourite crags are Pembroke, Taipan wall and the Needles California. He has put up many routes – both trad and sport – in the UK, Thailand, Australia, China and India, and is currently involved in rebolting existing routes and developing new routes in Thailand and the Costa Blanca.

Published in The Professional Mountaineer – Spring 2017